I have been sitting here thinking about what to write and it hit me that I don’t think I have ever done a post on just what Crohn’s Disease or IBD is.  So, what better time then now to talk about it.

WHAT IS CROHN’S DISEASE?

Let’s start with IBD or Inflammatory Bowel Disease.  IBD is a broad term used for many diseases.  They are chronic and incurable disease and usually make life a living hell for many of us.  The two main diseases under the umbrella of IBD is Ulcerative Colitis and Crohn’s Disease.  I won’t get into Ulcerative Colitis or UC yet.  Maybe on another post.

Crohn’s Disease was first described in 1932 by a number of doctors in a paper.  Because the author’s were listed alphabetically, Dr Burrill B Crohn was listed first and the disease got named after him.  The other doctors involved were Dr. Leon Ginzburg and Dr. Gordon D Oppenheimer.

Crohn’s Disease can affect any area of the digestive tract from the mouth to the anus.  It is most commonly found in the intestines and usually affects the end of the small bowel (ileum) and the beginning of the colon.  CD can affect the intestines in a number of different ways.  Of course, the most obvious is that there is inflammation.  It can affect the thickness of the intestinal wall.  One major thing about this disease is that it can skip areas.

When active, there are many symptoms that can occur.  They can include some or all of the following:

Besides those symptoms, Crohn’s can cause extraintestinal manifestations including but not limited to:

So what causes Crohn’s Disease.  Well, I wish I had a simple answer.  Truth is, no one really knows.  We know it is hereditary and it has been linked to a gene so we can say it is genetic.  Some say it is an autoimmune disease, which means the body is turning on itself and fighting something that isn’t there, however there has never been enough proof on this.  Some say diet will cause it but again, there is no one food or drink that can be linked to the disease.  Stress has been a factor.  So can environmental factors.  Truth is we really don’t know what the trigger for the disease is and the number of patients with the disease is growing every year.

So you suspect you might have the disease but you don’t know.  Well, the way to find out is to see a doctor.  For your initial diagnoses I would suggest seeing your internist first and let them rule out other illnesses and problems.  If they suspect IBD, then the next person to see is a gastroenterologist or GI.   They will preform a number of test and will most likely include a colonoscopy.  This entails inserting a think flexible tube called a colonoscope into your anus and up into the colon.  The scope has a small video camera on it and is used to take pictures of your colon.  Your GI will most likely take biopsies of your colon to test it for IBD as well as other issues like cancer.  While other tests are also used, like stool tests, MRI’s and sigmoidoscopies, the colonoscopy gives the best view of the intestines. 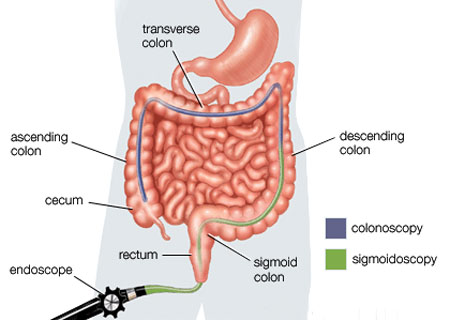 Once diagnosed, you will go through many emotions.  You might feel like your life is over.  You might feel relieved to have answers.  You most likely will still feel sick because even though you are diagnosed, you haven’t been treated yet.  This leads me to treatment options.  Now as I said earlier, Crohn’s is not curable (as of yet) so you will have to be on some sort of medicinal treatment for the rest of your life.  I know some people will argue with me over this, but we won’t get into that just yet.

As far as medicine goes, there are a bunch of different types.  For this I will quote from The Crohn’s and Colitis of America’s page:

Several groups of drugs to treat Crohn’s disease today. They are:

These include medications that contain 5-aminosalicylate acid (5-ASA).Examples are sulfasalazine, mesalamine,olsalazine, and balsalazide.These drugs are not specially approved by the Food and Drug Administration (FDA) for use in Crohn’s. However, they can work at the level of the lining of the GI tract to decrease inflammation.They are thought to be effective in treating mild-to-moderate episodes of Crohn’s disease and useful as a maintenance treatment in preventing relapses of the disease. They work best in the colon and are not particularly effective if the disease is limited to the small intestine.

Prednisone and methylprednisolone are available orally and rectally. Corticosteroids nonspecifically suppress the immune system and are used to treat moderate to severely active Crohn’s disease. (By “nonspecifically,” we mean that these drugs do not target specific parts of the immune system that play a role in inflammation, but rather, that they suppress the entire immune response.) These drugs have significant short- and long-term side effects and should not be used as a maintenance medication. If you cannot come off steroids without suffering a relapse of your symptoms, your doctor may need to add some other medications to help manage your disease.

This class of medications modulates or suppresses the body’s immune system response so it cannot cause ongoing inflammation. Immunomodulators generally are used in people for whom aminosalicylates and corticosteroids haven’t been effective or have been only partially effective. They may be useful in reducing or eliminating the need for corticosteroids. They also may be effective in maintaining remission in people who haven’t responded to other medications given for this purpose. Immunomodulators may take several months to begin working.

These medications represent the latest class of therapy used for people with Crohn’s disease who have not responded well to conventional therapy.  These medications are antibodies grown in the laboratory that stop certain proteins in the body from causing inflammation.

One medicinal treatment I won’t go into, but has helped many, is medicinal marijuana.  It isn’t legal in every state so it isn’t an accepted practice yet.  However for people that have used it to treat their Crohn’s will swear it is probably one of the best things to help them.

Besides medicine, many people found by changing how they eat can help with pain and help bring on and stay in remission.  Again, there are a lot of different diets, like drugs, and there is no one diet that works for everyone.  Some of the biggest diets used though are the Paleo diet and Gluten Free diet.

When everything fails, and you just don’t get better, surgery might become an option.  With UC, it has become a sort of cure because once you remove the disease part of the intestines, you remove the disease.  With Crohn’s though, this isn’t true.  As I mentioned earlier, the disease can jump around and skip areas.  Surgery with Crohn’s is usually the last option because even if they remove the area that is bad, there is nothing from having it appear elsewhere.

Some things to know about surgery:

Now there are a number of reasons to have surgery.  One reason is to help correct and treat for fistulas, fissures or obstructions.  Some people will have their colons removed and may get a J pouch or an ostomy.

Now you know a lot more about this one disease and I will now throw you a curve ball.  Crohn’s disease can be called a number of different names.  This is because they usually call it based on where the disease is and this can change over the years.  to best describe the names I will again quote from the CCFA:

The following are five types of Crohn’s disease, together with their presenting symptoms:

The most common form of Crohn’s, ileocolitis affects the end of the small intestine (the ileum) and the large intestine (the colon). Symptoms include diarrhea and cramping or pain in the right lower part or middle of the abdomen. This type is often accompanied by significant weight loss.

This type affects only the ileum. Symptoms are the same as ileocolitis. In severe cases, complications may include fistulas or inflammatory abscess in right lower quadrant of abdomen.

This type affects the stomach and the beginning of the small intestine(the duodenum). Symptoms include loss of appetite, weight loss, nausea, and vomiting.

This type is characterized by patchy areas of inflammation in the upper half of the small intestine (the jejunum). Symptoms include mild to intense abdominal pain and cramps following meals, as well as diarrhea. In severe cases or after prolonged periods, fistulas may form.

This type affects the colon only. Symptoms include diarrhea, rectal bleeding, and disease around the anus (abscess, fistulas, ulcers). Skin lesions and joint pains are more common in this form of Crohn’s than in others

So there it is in a nutshell.  You now know what I have been blogging about for a number of years now.  The one thing I do want you to take away from all of this is if you do get IBD…your life is not over.  Yes there are some that do die from the disease and there are others that have a lot of issues and problems and find living a major hassle.  For the majority of people though, we do what we have to and live our lives.  There is a lot of support out there and you just have to reach out if you want it.  The IBD community is really big and we love to support one another.

5 comments on “What is Inflammatory Bowel Disease? Part One: Crohn’s Disease”