Here is another book review.  This one is about diet and IBD.  The full title is The IBD Healing Plan and Recipe Book: Using Whole Foods to Relieve Crohn’s Disease and Colitis.  It was written by Christie A Korth, CHC, AADP.

So you are probably wondering just what is the book about and what makes the author a specialist on this.  Well, at age 19, she was diagnosed with Crohn’s Disease.  Like most of us, she went through many different diagnoses and it took 10 years to get the proper one.  Again, like many of us, she then ran the gambit of meds to have none of them work.  After years of suffering, she started to experiment with her diet and found that it would play a major role with her healing process.

Christie starts the book talking about IBD.  From there, she goes into how nutrition helps the body.  She talks about different food intolerance’s  and how people with IBD may suffer from some of them like lactose intolerance, gluten intolerance, etc.  By the end of the book she gives recipes that are based on what she talks about and are sensitive to the food allergies.

Overall, I found this book pretty helpful.  I got a new insight into diets role with IBD.  It took me a little over 20 years to see just how important diet is with IBD.  I went years eating whatever I wanted.  Now that I am gluten-free I have been enjoying living a symptom free life for about a year now.

Sadly, because life has been so busy lately, I haven’t had time to explore and make some of the recipes she includes with the book.  They do look interesting and tasty and one day I will make them.  One recipe I want to try is the Apply Rosemary Cornish Game Hen.  Another recipe which might go well with the hens is the Yummy Healthy Onion Rings.  I miss onion rings (they aren’t gluten-free) and this recipe is gluten-free.

Overall, I would recommend this book to anyone with IBD, especially if they are having a tough time with symptoms.  She gives great insight into the disease and how food plays a part with it.

When I first heard about the ride I thought this was something that was part of CCFA and I didn’t realize it was a separate organization.  I also wasn’t to interested because I haven’t rode a bike in many many years so I knew there was no way I would be able to do a 200 mile ride.  Then a friend and co-IBDer told me I can crew.  The crew are the people who support the riders in a number of different ways from making sure the road is clear of debris to manning a rest stop to just cheering them on to raise their spirits.  This sounded more like my style so after some thinking, I signed up.

As time went on, Marisa, the friend that told me to crew, kept telling me how much fun I would have and how it would change my life.  I knew it had changed a lot for her and I didn’t know what it would hold for me.  I would soon find out.

When I arrived at the site for the shuttle bus, I was the first one there.  Like most things, I was the first one and I was alone.  Eventually others would arrive and the first ones to come were friends that I have spoken to online and have followed in blogs, but never met.  It was like a book coming to life.  People I have only read about I was now meeting. 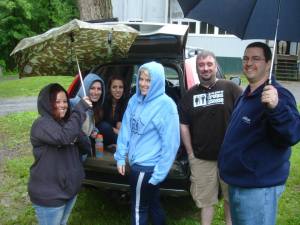 That first night was a rough one.  A tropical storm was drenching us and there was no escaping the rain.  One of my jobs was to help load the equipment truck so I was soaked by the end of the night.  I would be the last to come back to our bunk.  I would see everyone in one area chatting and getting to know one another.  I was alone. wet and cold.  But I was welcomed with open arms and right away I felt like part of a family. 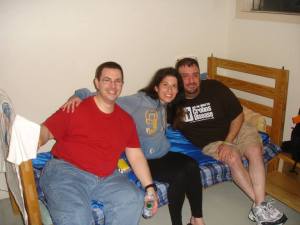 For many of us, this was our first time with GYGIG and even the first time meeting each other.  Yet when we all tried to go to bed and someone’s snoring kept us all awake, we truly were like a family as we all yelled at the snorer (who will remain nameless).  What we found from this was within hours, we truly were a family.

The next two days would be rough for me.  My job assignment was Camp.  This entailed making sure the equipment truck was loaded and unloaded, the campsites were cleaned and nothing got left behind when we left, setting up the camp for everyone’s arrival, making sure snacks and drinks were provided, keeping morale up…ok I am getting tired again just thinking about it all.  I have had problems with sleep and I seem to always be tired.  My back has been hurting on and off from my degenerative disks.  Overall I am a mess but this weekend, all of that went away and it was like I was 18 again.  I had so much energy.  I think I got it because even though it was hard work, I enjoyed doing it. 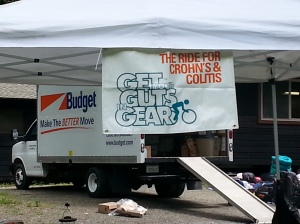 The best part of the weekend though were the people who I met.  Some I had met before.  Others I had spoken to online but met the first time here.  Many others I was meeting for the first time ever.  Not everyone on this ride had IBD but were somehow connected to it.  At night, the group I hung out with would share stories about our lives and IBD.  This was the first time I was with a large group of IBDers and they were all being so open with their disease.  I loved it.

At the end of the weekend, I snapped a photo.  It would be one of my last memories for the weekend.  It was a breathtaking view of the mountain and water.  It described my weekend perfectly.  Wet, some ups, some downs but overall breathtaking.  Some of my Camp crew dropped me off to get my bag before I left.  I started this journey alone..  I left being part of a family.  When I first signed up for GYGIG I only planned on doing it the one time.  Now, I can’t see my life without it.   It is an experience that I never want to forget and hopefully can relive it every year.

Yesterday I participated in the Take Steps for Crohns and Colitis which is run by CCFA.  Better yet, I volunteered.  Last year I was wiped out from walking so I decided this year I would help out instead.  Ok, that took its toll on my body even more. Today my back and neck are achy and my feet are sore.  But it was soooo worth it.

One thing I like about the walk is the location.  I was helping out at the Liberty State Park walk and the views from there are breathtaking. 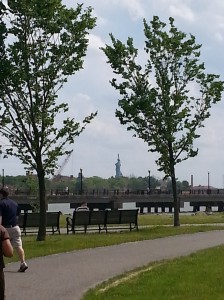 After I take this in I head over to my assigned area, the food tent.  This year I decided to put my talents to use.  I helped get donated food for the walk.  I was able to get some coconut water, vitamin water, Smartwater, fruit and chips. 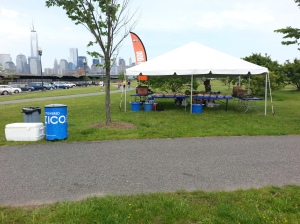 After we got set up, I decided to look around before it got real busy.  There were tents for some drug reps (Humira, Remicade),  Team Challenge sign ups, the Kids Corner with bouncy house, and the DJ.  All was quiet before the storm. 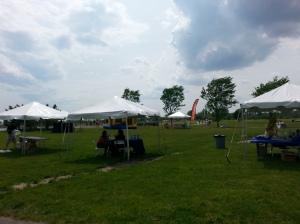 As you can see from the pictures, it looked like a storm was coming but luckily, the rain held off.  The wind was pretty powerful though.  With the almost 90 degrees and humidity, the wind was refreshing.

At 4:00, the walkers were off for a 2.15 mile walk.  When they came back that was when the real fun began.  Our tent got mobbed.  Aside from what I brought, we also had sandwiches, cookies, granola bars, orange juice and spring water.  Pretty much everything went.

One thing I have noticed about these walks, and it disturbs me a little is that everyone chats but no one really talks about the disease …. which is why we are all here.  I was talking with one of the volunteers and he asked why I was there.  I mentioned I had Crohns.  He said his son has Crohns and that was it.  No further discussion.  It really hit me that although everyone comes out to bring awareness and come together, no one really wants to talk about it still.  My only conclusion is because it isn’t just the patient but friends and family there also that they don’t feel like opening up.  I can understand that.

This up coming weekend is Get Your Guts in Gear.  I know a lot of the volunteers that will be there.  I know we will be talking about it a lot more but we will also have fun and talk about other things.   2 weeks and 2 awareness events.  It is enough to tire these old bones.  After the walk, I feel achy.  Hate to see what next week brings.   Stay tuned for a recap.