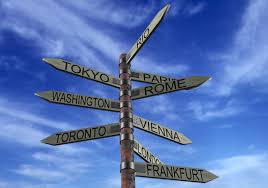 If I could go anywhere.  Well, who is to say I can’t do that now?  Maybe I will leave work, grab a suitcase, and head to the airport to jump on the first plane to leave..no matter where it is going.  Ok, that won’t happen.  But, there really is nothing stopping me from traveling with the exception of money.  I don’t have a bottomless bank account so I can’t go where I want.

I am one of the lucky ones.  My disease doesn’t prevent me from traveling (see earlier post on traveling with IBD here), or at least I try not to let it prevent me.  For the past couple of years now my wife and I try to go somewhere in the summer for a week just to get away and see the world.

So if I had to pick one place to go….now that is a tough one.  There are so many places to see that I don’t think I could pick just one.  For starters, I want to see Europe.  I want to see the ancient ruins of Italy.  Take a gondola ride through

Venice.  I want to look out from the cliffs of the Greek Isles and see the Mediterranean Sea.  After there, I would love to head to Spain to eat some authentic tapas and sangria.  Then travel north to a place I have wanted to visit most of my life, France.

Since taking French classes in Jr. High school, I have wanted to visit France.   I enjoy French food so that doesn’t worry me.  I would love to walk down the Champs Elyse in Paris and take in the sight of the Eifel Tower.

I would even just enjoy standing on a bridge overlooking the Seine river.  After taking in the sights of Paris, I want to visit some of the vineyards to see just what makes french wine so great.  After I have had my fill, I want to go to Northern France to see the fields of Normandy.  I am a big WWII buff and want to see just where the invasion took place.  I would also visit all the heroes that are buried there to give them a thanks.

Wow, I can go on for hours talking about places to visit, but I notice as I am writing that France really sticks out on places to go.  I guess to answer the topic then, it would be France.  But I wouldn’t stop there.  I want to see most of Europe and Scandinavia, some of the Baltic states, some places in Asia, Australia and New Zealand, Hawaii, California and a number of US States.  There are areas in the Middle East and Africa I want to see also but I want to wait until civil unrest slows down.

Through all of this though, I never once think about my Crohns and how it will slow me down…because when it comes to my dreams, nothing will ever stop me from achieving them.